A heavy and seemingly robust car battery whether for a Holden or a Porsche, does need to be stored in the correct way. A customer last week discovered that a battery carried incorrectly even for a relatively short period can cause acid to leak and the battery to become defunct!?

So, if you are ever transporting a car battery make sure it stays completely upright.

Here’s the gold standard in transporting a car battery from movers.com a moving expert.

With many heavy metals and toxic chemicals inside a car battery, it is very important to both wrap and box it properly before placing it in a truck or car with other items. The best material to wrap a battery in is thick cloth in the case that it leaks during transport. Using an old towel would be the best bet, however, an old sheet would do as well. Simply sit the battery in the middle of the towel or sheet and fold the sides of the cloth up and around the battery, completely covering it on all sides.

After it is totally covered, take duct tape and secure the material over the battery. Wrap duct tape on all four sides as if you were putting a ribbon on a present. This way the material is sure to cover the battery and readily absorb any chemicals that may leak from it during the transport.

After covering the battery in cloth, place it in a box slightly larger than the object itself. Make sure to place battery on its bottom and not to place it upside down. Once the battery is in the box, take newspaper and pack it tightly around all sides, securing the device in place so it does not get tossed around during transport. Duct tape the top of the box, completely enclosing the battery inside. Make sure to label the box both “Fragile” and “This Side Up” so the box is handled carefully and remains upright at all times. 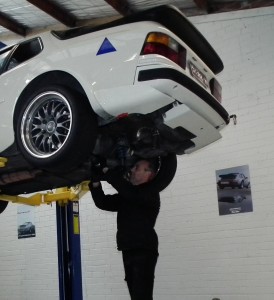